Life at Giza near Cairo Egypt has not changed much in decades. At the time these pictures were taken in 1952, the Pyramids at Giza were already a well known tourist attractions around the world. But there is another side to the Pyramids, the day to day life of the people who live in the shadows of history.

This is a water pump powered by a bullock walking around it all day. The water would be collected in the tub below and then carried to wherever it was needed. 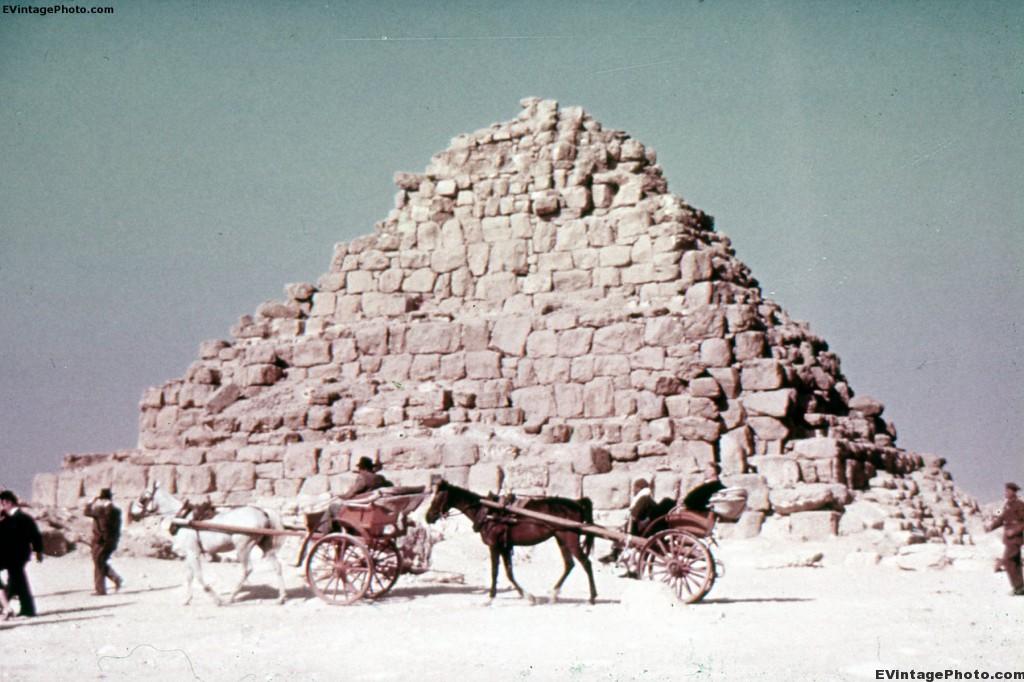 Tourists are taken past the pyramids in horse drawn carts. At the time of this picture, they may have been driven all the way from town like this. 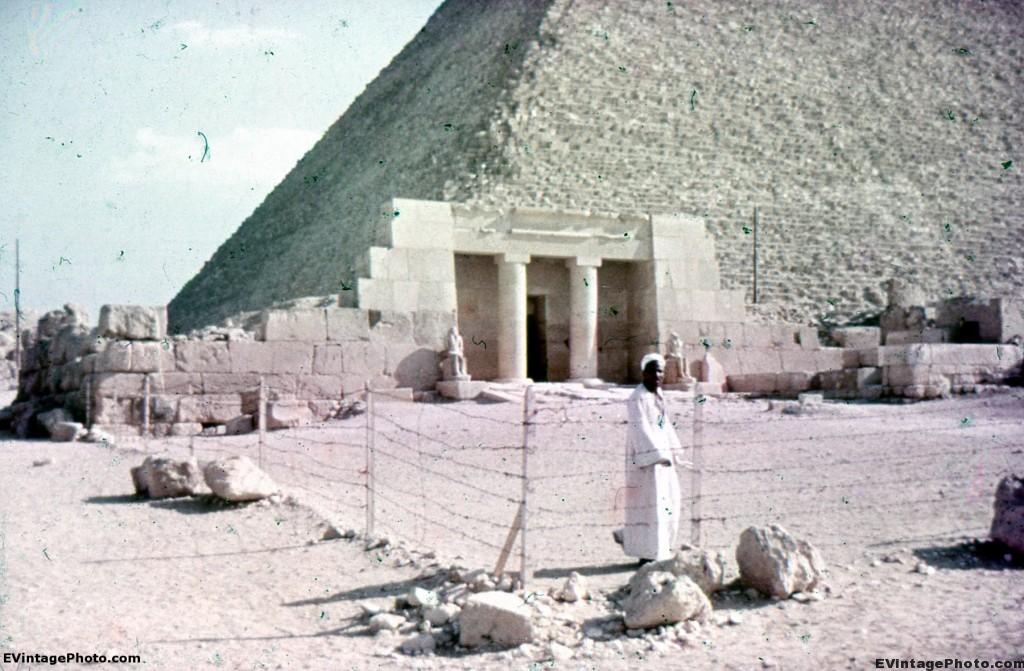 The tour guides at the Pyramids had quite the racket going on here. A fence keeps the riffraff out. No doubt the camel rides are just out of the frame of this picture here. They probably pre-dated the “Made in China” trinket revolution that infests tourist sites around the world these days.

I apologize for the poor quality of this photo, but I could not clean it very well due to how the slide is preserved. But, I thought this photo of the Tomb of Menkaure was still very interesting. Mostly because I have never heard of Menkaure. 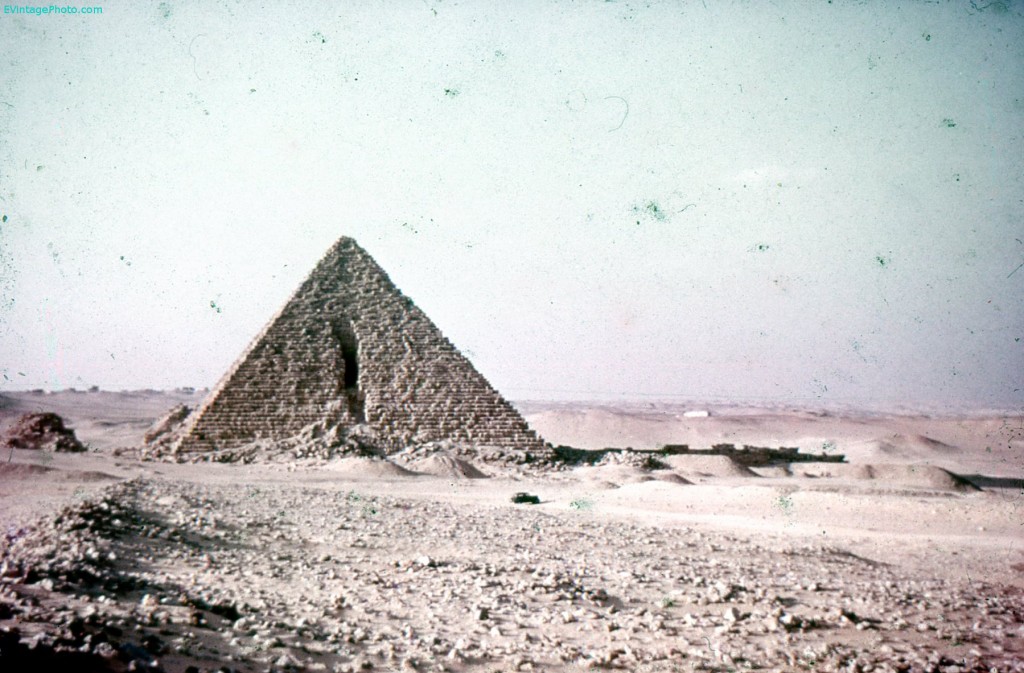 Old photo of the Tomb of Menkaure from 1955

The Tomb of Menkaure is the smallest of the three pyramids in the Giza Complex. Menkaure (also known as Mykerinos and Menkheres) was a ruler of the 4th Dynasty of Egypt. It started about 2530 BC. He ruled between 18 and 22 years and died in 2500 BC.

He was thought to have two wives, Queen Khamerernebty II (his eldest sister,) and Queen Rekhetre. Unfortunately he did not have many children, Khuenre, Shepseskaf (who succeeded his father as Pharaoh,) Sekhemre, an unnamed daughter who died in early adulthood, and Khentkaus I.

One of the most interesting things about Menkaure is that more statues of him exist then any other 4th Dynasty ruler. Many of which are in the Boston Museum of Fine Arts, and the British Museum thanks to work in 1837 by an English Army officer by the name of Richard William Howard Vyse and the engineer John Shae Perring. His actual sarcophagus was lost in a ship wreck off of Malta in 1838 while it was being shipped to England.

The Egyptian Museum in Cairo holds 120,000 or more artifacts collected from locations around Egypt, but especially from the Giza complex. 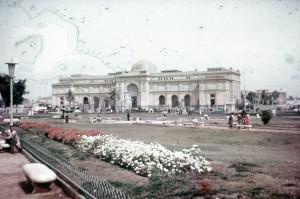 This is an interesting picture of the museum building as it existed in the 1950s. The exact year is unknown but as it is part of the same “art and history” collection of slides that includes the picture of the January 1952 Cairo Rights, we’ll call it 1952 also. 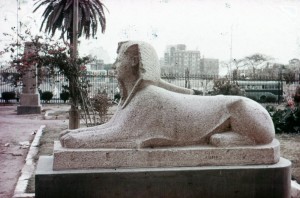 This small Sphinx statue sits outside the museum. There isn’t much information on the web about it that I can find, other then it’s location, but the statue has a catalog number carved into the side of it. So if anyone knows the origin of this statue, I’d love to know more.

From the set of slides labeled “history” and “art” is this one labeled “Cairo Riots.” I don’t know if this was the prelude to “Black Sunday” where 750 buildings in downtown Cairo burned down in response to the British killing of 50 Egyptian Policemen in January 1952. Or if it was a prelude to the Egyptian Revolution that began a mere six months later. 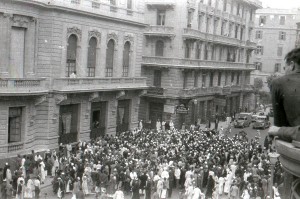 From the image, it doesn’t look so much like a riot as it is a gathering of people just standing around blocking the road. The detail on this photo is outstanding in my opinion. Look at the vintage car and two trucks over in the right hand corner for instance. Across from there looks to be a travel agency of some sort, I can make out “Passenger Agency” easy enough, but can’t see the name of the agency.

I’d love to know what this street corner looks like now. Do these buildings still exist? Or are they among those that burned?